New York, NY – July 25, 2018 – Georgina Bloomberg announced today her sponsorship of Paralympian Sydney Collier in support of her bid to compete in the 2020 Tokyo Paralympic Games. Bloomberg, who is one of the United States’ top show jumpers, has been friends with Collier for years and is excited to help the talented para-dressage rider continue on her quest to represent the United States in championship competition and further promote the sport of para-dressage.

“I have known Sydney for years and always had a love of her as a person and great deal of respect for her as a rider,” said Bloomberg, who won a team bronze medal at the 2015 Pan American Games. “She is one of the most positive and kind people I know and seeing the joy that horses and riding brings her is heartwarming. When you watch her ride, her determination and refusal to let anything get in her way is truly inspiring.”

Collier, 20, approached Bloomberg about her sponsorship idea after the two riders met at a fundraiser for the U.S. Equestrian Team for the 2016 Rio Paralympic Games. Bloomberg purchased Collier’s horse, Fherrigamo, a seven-year-old U.S.-bred Oldenburg gelding (Fhitzgerald x Di Caprio), and will cover “Fritz’s” expenses in the lead-up to the 2020 Olympic Games.

Bloomberg said, “When she approached me about supporting her and purchasing her horse, it was a no-brainer for me. I am so proud to be on her team and to be a part of her journey. Fritz is by far the most meaningful horse I have ever purchased, and I cannot wait to be on the sidelines cheering the two of them on during their journey.” 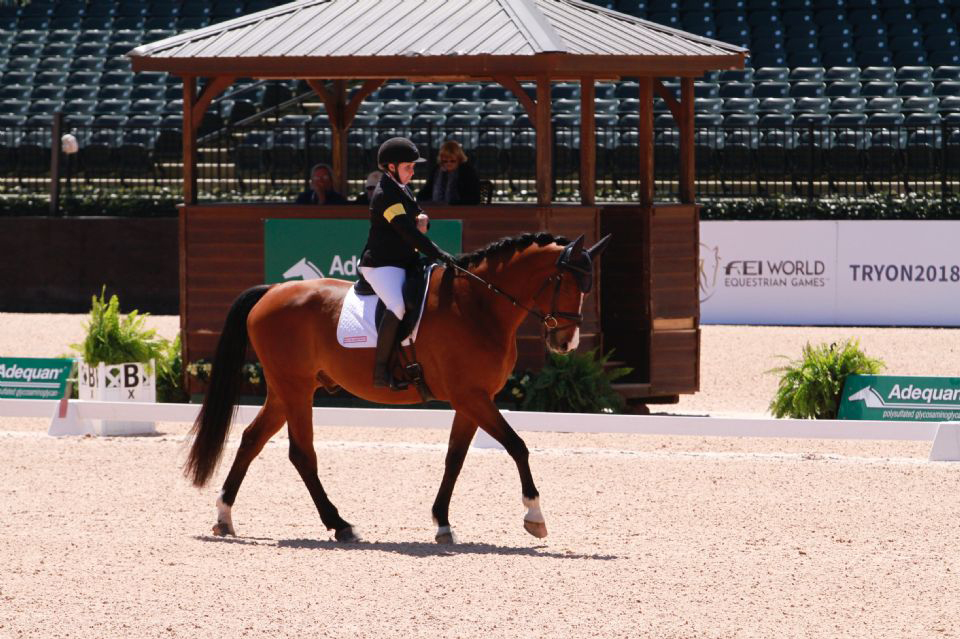 “I wish I had enough words to express how grateful I am for this opportunity as I work toward the goal of Tokyo,” said Collier, who rides in Grade I para-dressage classes due to her extremely rare diagnosis of Wyburn Mason Syndrome. “My family and I can’t express how much it means for someone else to have faith in me. It’s so amazing because it lifts a huge financial barrier that I have always experienced. Because of this, I’ll be able to focus even more on my training and being the absolute best athlete that I can be. This opportunity is not one that many people get, and I just want to make everyone proud. It’s big shoes to fill, but I know Fritz and I can do it. We’re an awesome partnership.”

Collier, who started riding as able-bodied at the age of seven, made the switch to para-dressage when she was 11 after a rare birth defect caused tumors and a massive stroke left her with limited use of the left side of her body, completely blind in her right eye as well as three-quarters blind in her left eye, following brain surgery.

“I spent the summer in rehab to learn how to walk so that I could ride horses again,” recalled Collier. “I thought that as long as I could get on a horse again, I would be happy. Before my stroke, I wanted to ride in [the Kentucky Three-Day Event] and represent the USA in the Olympics one day. I never set my goals low!”

Collier found the sport of para-dressage after seeing it at the 2010 Alltech FEI World Equestrian Games (WEG) in Kentucky and immediately set forth on revised goals, but never gave up on her Olympic dream. After first representing the United States at the 2014 WEG in Caen, France, she went on to compete at the 2016 Rio Paralympic Games, where she finished seventh individually with Western Rose. 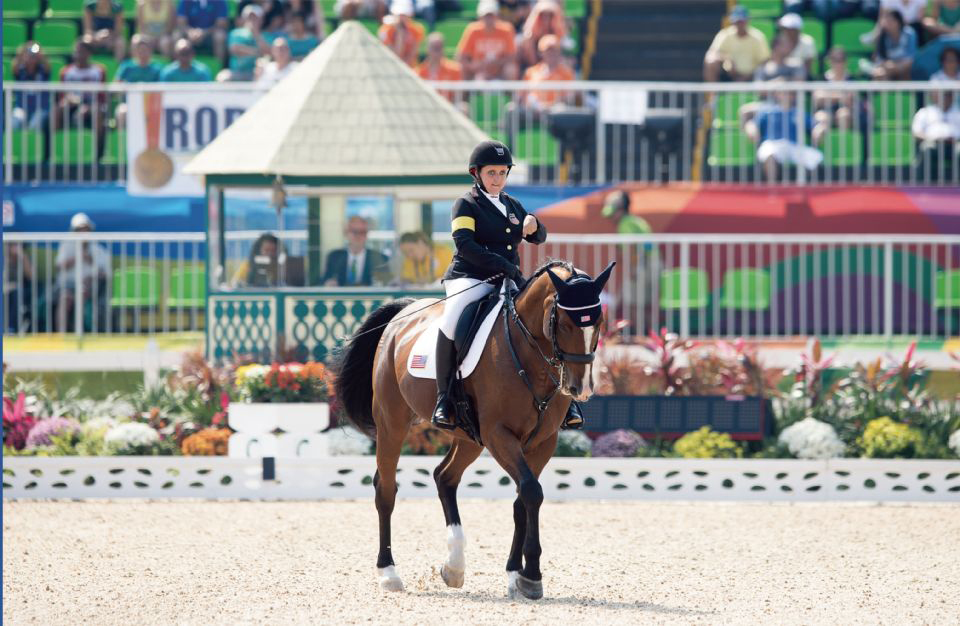 With her new mount Fritz, Collier believes she has the ability to help the United States at the next Paralympic Games. The pair had solid results at a recent CPEDI3* competition in Tryon, NC. While this year’s WEG is too soon to set as a goal for the young horse with limited show experience, Collier thinks he will be a medal contender in 2020.

“He’s a hidden gem,” said Collier, who trains with Wes Dunham in New York. “He has an amazing walk and a really relaxed personality. He’s an old soul for only seven years old. He really takes care of me. I’m lucky to have such a talented partner.”

Collier believes that her partnership with Bloomberg will also help grow the sport of para-dressage and has a goal of promoting it with younger riders, a goal Bloomberg shares as her own Gotham North is the presenting sponsor of the Adequan®/FEI North American Youth Championships.

“The sport is really growing and developing,” said Collier, who wants to continue the legacy of her friend and fellow para-dressage rider Jonathan Wentz, who encouraged her to get classified in the sport and passed away in 2012. “It’s super cool to see young adults and teens getting into [para-]dressage. When I started, it was just me and Jonathan. I owe everything to him. A big part of my story is to carry along his memory and make him proud and get the gold for both of us. Developing junior and young rider programs is a huge goal of mine; to grow a sport you need young people to be interested in it. It’s cool to see more and more people are coming into it.”

Collier is excited to continue her work with Fritz and prepare for 2020. 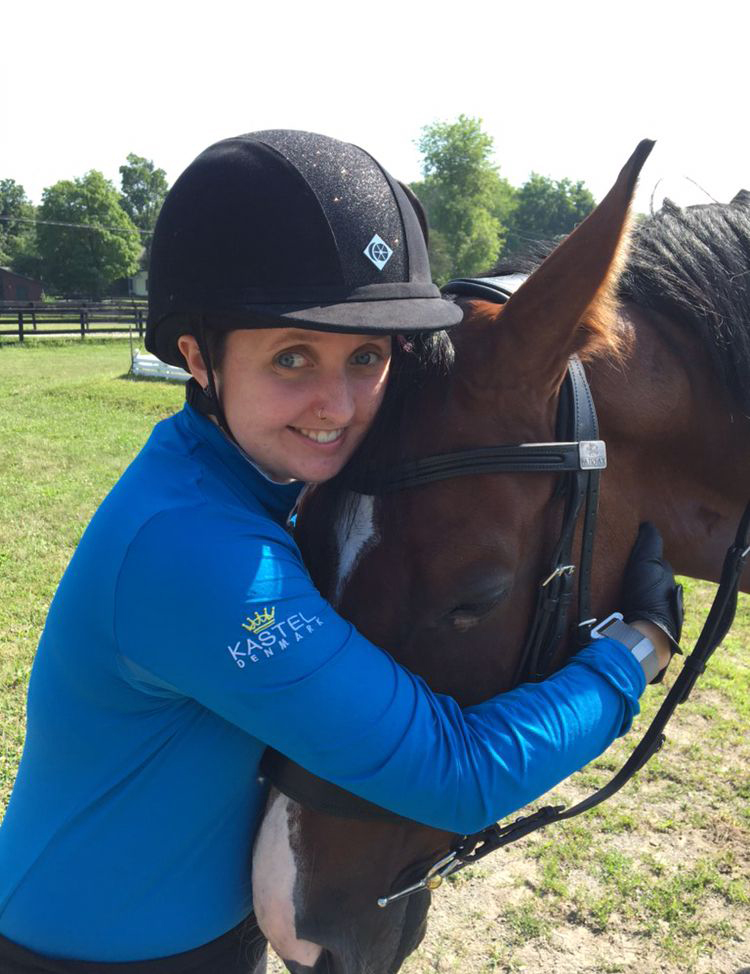 “I always said that just because I had a stroke doesn’t mean I have to give up on my goals of representing the U.S. one day,” said Collier. “It was the most empowering thing I ever experienced. I want to show other people no matter what they’re facing, if you set a goal and are determined enough, you can achieve it. No matter what life throws at you, anything is possible. I’m so lucky to have such a supportive family and now a supportive sponsor. I am really, really happy and excited to start the next chapter and to have Georgina on my team as I train toward Tokyo.”